History of our House Names

In 1835 Melbourne was founded, two years later the first white settlers came to Dandenong and Captain William Lonsdale set up a Native Police force made up of Indigenous Australians from the local tribes.

The next year, 1838, the Reverend James Clow established the Corhanwarrabul Run and built his homestead which he called “Tirhatuan” after the Aboriginal name for the flying possums in the area. The run stretched all the way from Dandenong Creek to the Dandenong Ranges, which the Aborigines called Corhanwarrabul. 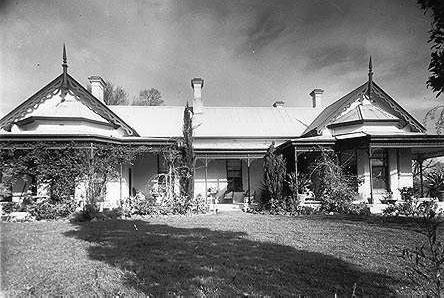 During this year the wife of the Governor of Van Diemens Land, Lady Eleanor Franklin visited the Native Police Force. She planted a tree that can still be seen down the end of Brady Road, near Churchill Park, along with the ruins of barracks used by the Native Police.

In 1882 the Row family built the Stamford Park Homestead (pictured) and named it after the town near Bourne, Lincolnshire, England where they had come from. At this time the area was well known for the horse stud farm associated with the Police Paddocks and the horses run by the Row family.

The Blacksmith around this time was named Nicholas Bergin. His shop was located just west of Bergins Road where it intersects with Stud Road. Mr Bergin became very well known and he suggested the name Rowville in honour of the Row family.